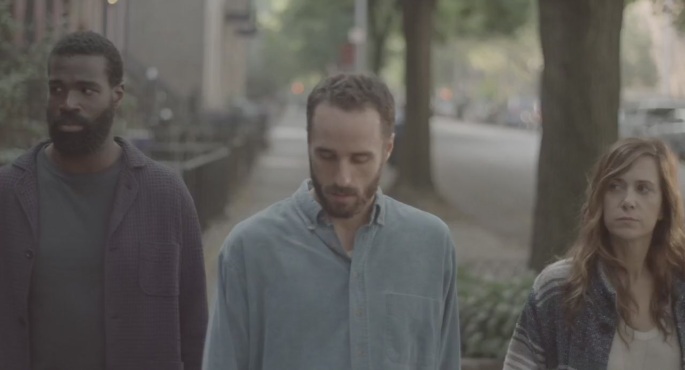 A video where a grown-up man impersonates a newborn baby. That’s what Freddy, a Latin artist who we have just met at his –very Brooklyn-looking– apartment, proposes to the owner of an Art gallery in the first scene of Nasty Baby, the last movie of Chilean director Sebastián Silva, screened last Monday at Barcelona International Independent Film Festival.

Our hero’s play arises from his emotions, clearly reflecting what’s going on in his life. Freddy, an artist who lives with his boyfriend, is trying to “make a baby” with his best friend, Polly, perfectly played by Kristen Wiig. But Freddy’s sperm is poor and his partner Mo (Tunde Adebimpe) will be the one in charge to help Polly become a mother. Personal evolution brings professional changes and Freddy’s creation ends up becoming a group project when a bunch of friends join him in his artistic journey.

Silva wrote, directed and starred in a movie where the characters are introduced in the most realistic way possible, each and every one of them showing an infinity of nuances.  Young professionals in a gentrified Brooklyn full of tension between the resisting old neighbors and a whole new class of occupants, with more purchase power and greater demands. Viewers know something is going to happen but never get to realize where Silva’s directing skills are going to take them.

The conflict comes in late, when we have learned to love Freddy, Mo and Polly; when we finally understand them and see ourselves in Mo’s inaction or Freddy’s anger. The conflict comes and catches us off guard, and tears our world apart; and captures us even more. Everything we had felt for these characters is now put in question and we find ourselves in an inner moral debate. Essential for the conflict are the couple’s neighbors: The Bishop and his partner, played by Reg E. Cathey and Constance Shulman, who we know from House of Cards and Orange is the New Black, among others.

The movie’s realism increases with the diversity it shows. The most real New York diversity brought to us by a number of cultures and accents. And even languages, as we hear a very Chilean Spanish every time Freddy speaks with his brother Chino (Agustín Silva), which is surprising in a North-American production filmed in English.

At the end, what started to look as one of the main elements of the movie, the play, Nasty Baby, becomes a mere anecdote to let Freddy, Mo, and Polly’s ease shine, as does their world, turned upside down by a cluster of accidental actions that will hunt the viewer for days after having left the theatre.

Article published on the Spanish site of Indiewood/Hollywoodn’t on May 3rd, 2016. Original article in Spanish: http://indienyc.com/nasty-baby-usa-el-realismo-mas-puro-para-hablarnos-de-la-violencia-invisible/

Sitges International Fantastic Film Festival comes to an end and figures come to light. This year, the greatest event on genre movies in Spain increased sales by 20.8%, meaning 77,955 tickets were accounted for, versus the 64,509 sold in 2014. Income increased as well, this time by 23,1%.

This year’s figures show the loyalty of an audience devoted to fantastic and horror movies, as well as the visibility the event is gaining both at the national and international level. Partly responsible of this success is the number of high-quality movies screened every year. At Indiewood/Hollywoodn’t, we have selected five gems you will surely regret to miss.

Considered Best Feature Film by the Festival’s jury, Karyn Kuzama’s thriller shows us how a son’s death can change the lives of his parents, played in this case by Logan Marshall-Green and Tammy Blanchard. She disappears soon after her son does. Years later, when she comes back, it is obvious that this is not the same person. The movie’s intrigue and suspense conquered the jury and took home the most important award of the Festival.

Movies within movies. This is The Final Girls’s proposal. Taissa Farmiga plays Max, the child of a movie star. The viewer is left to figure out the reasons why she ends up inside a horror movie starring her mom. The film features some well-known names from the Hollywood scene, such as Thomas Middleditch, Adam DeVine and Nina Dobrev. Audience and jury were captivated by The Final Girls, what drove it to leave the festival as the winner of the Jury Special Award and the one to Best Script.

What makes this festival different from any other is the amount of guts one can see over a week. And Turbo Kid is no exception. This production mixes fantasy and romanticism, featuring two teenagers living in a “future” (1997) we don’t want to imagine. Turbo Kid, our superhero, and his partner Apple will have to fight for their lives in a world taken by robots, where water has become the most precious asset. Each one of the three screenings of the movie filled streets with endless lines of people and theatres with cheers. Turbo Kid, winner of the more than deserved Best Music Award, was one of the most expected movies in the festival and did not let anyone down.

The perfect ending for a festival like Sitges is a movie like Into de Forest. Patricia Rozema directs Ellen Page and Evan Rachel Wood in a universe where humanity is close to an end. Nell and Eva will have to survive hunger, among other physical and (to a greater extent) social issues.  A drama about survival to take a break from so much horror.

Born in Florida, Craig Zahler leaves Sitges asa proud winner of the Best Director Award. His opera prima Bone Tomahawk exemplifies the cme back of a genre, Western, that also has a place in the Festival. Texas, cannibalism and an exceptional cast lead by Kurt Russell, Patrick Wilson and Matthew Fox are the perfect prescription for a successful movie.

Article published in the Spanish site of Indiewood/Hollywoodn’t on October 27th, 2015. Original article in Spanish: http://indienyc.com/las-5-peliculas-del-festival-de-sitges-que-no-te-puedes-perder/

When you first arrive to Sitges, you know this is going to be something different from what you have seen before. It is a fantastic film festival and, as so, blood, guts and zombies are a constant during the ten days when the event takes on this city. Screenings, red carpets and performances led by the audience do not stop from sunrise to well into the early hours of the following day.

For starters, on the first Saturday of the festival, just after it has taken off, zombies take the streets. Never-ending lines fill the roads, full of people who want to become a zombie for an evening. This is one of the most popular side activities of the festival, which also include screenings of TV shows, master classes, book launches and roundtables with leading figures of the industry, such as Oliver Stone.

But if this festival is one of the most important genre ones in the industry, it is because of its screenings. This year, 169 movies made up the different sections in which the festival’s program is organized. Solid names in the genre movie industry shared prominence with first-time directors and, together, they showed the audience proposals for both classical horror and new tendencies of the industry.

American movies played a special role at this 48th edition of the Catalan Fantastic Film Festival held in Sitges. Both the inauguration and the closing events were led by the screening of American movies. The Witch, directed by Robert Eggers opened the inauguration gala, whereas Into the Forest, directed by Patricia Rozema and starring Ellen Page and Evan Rachel Wood was a big success on the closing ceremony.

Also American were many of the movies awarded in this Festival’s selection. The invitation, directed by Karyn Kuzama, won the award for best feature length film, and so did David Gregory’s Lost Soul – The Doomed Journey of Richard Stanley’s Island of Dr. Moreu’, in this case for best documentary film. Anomalisa, directed by Charlie Kaufman and Duke Johnson, won the best feature length film in its section, New Visions, and X-treme best feature film went to Bound to Vengeance, produced between Mexico and the United States. The Final Girls, by Todd Strauss-Schulson got the Special Jury award and Best Screenplay, and Craig Zahler, native of Florida, won the Best Director award for Bone Tomahawk, which also achieved the José Luis Guarner Award.

Great success of the American movies present at this edition of the Sitges Film Festival, which direction has already decided that next year’s run will be dedicated to Star Trek.